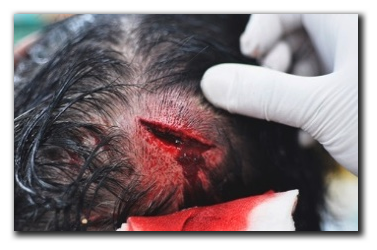 Our skin is a protective layer. The cause of cut injuries can be many, but first aid is not to repair a serious cut injury.

Minor cuts however can be treated as a wound.

First aid for bleeding is to apply pressure to the wound. A bleeding wound should always be kept as clean as possible, but the most important thing is that you stop major bleedings. Do not remove foreign objects in wounds, leave them there until help arrives.

Large bleeding from arms or legs may be easiest dealt with by keeping pressure on the bleeding until help arrives. Only hospitals can repair cuts, but you can limit the damage by stopping bleeding and covering wounds.

Previous Emne
Back to Leksjon
Next Emne
Login
Accessing this kurs requires a login. Please enter your credentials below!
Lost Your Password?