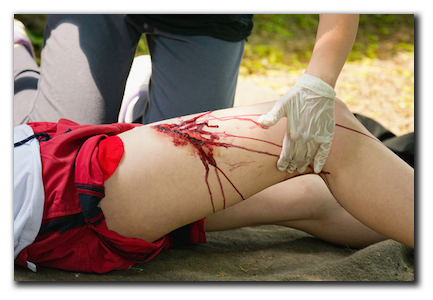 Bleeding can be divided into two: external bleeding or internal bleeding. If a person loses a lot of blood, it can lead to failure of the blood circulation in the body, we call this circulatory failure. Stopping or reducing major bleeding is therefore important first aid.

We cannot stop any internal bleedings; the person must therefore go to hospital quickly.

Damage to the skin will bleed from the wound and the person may lose a lot of blood. There is also a risk that impurities can enter the wound and the body to cause infections.It is therefore important to stop bleeding as soon as possible and protect the wounds.

Major bleeding can cause symptoms such as:

Do not remove stuck objects, as this may increase bleeding.

Keep an eye on the bandage. If it continues to bleed, you can increase the pressure on the wound. If it bleeds through, put a new bandage on the outside. You can also use an item that presses harder against the bleeding. Make sure the person is warm and calm. Call Emergency 113 if the symptoms increases or the situation changes.

Not all bleeding is visible on the outside of the body. In the event of a falls, crush injuries and traffic accidents for example, you must suspect internal bleeding.

You should always call Emergency 113 if you see any of these symptoms for people who have been victims of an accident with this causes.

You cannot stop internal bleeding. This is what you should do while waiting for an ambulance:

Talk to the person and notice if anything changes, and call Emergency 113 to information about changes.

Previous Emne
Back to Leksjon
Next Emne
Login
Accessing this kurs requires a login. Please enter your credentials below!
Lost Your Password?